So I wanted to get a wireless headset for Christmas (for my wife to give as a gift, but of course, I need to identify which one I want.) I wanted them for listening to podcasts, Hulu.com and anything else that was playing on my computer (usually not music, though I did want stereo). I spent quite a lot of time looking online for something with a good review and a good price. Living in a relative backwater location, I could not really check out my option in a store, so I searched online.

I was quite frustrated in that I could not really tell, from the websites I had found, how these worked. Vague websites drive me crazy. I finally settled on the Freetalk Talk 5191 (below), which I ordered through Amazon.com for $63, including shipping. The reviews sounded good and I liked the style better than the more expensive Sennheisers. Unfortunately, I could not tell from the Amazon website that these were USB headphones, which is obvious from the photo below which I captured from Walmart.com. 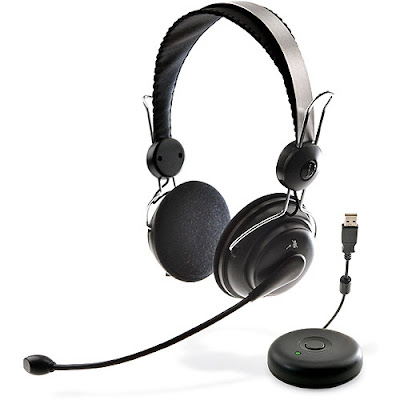 I have had USB headsets in the past and I did not like them because there were not very dependable. Sometimes they would be plugged in and would not work. Sometimes I would unplug them but the audio would not transfer to the computer's speakers. So I was bummed that I got something that was not going to work was well as I would prefer.

Then, still before Christmas, I came across the ioGear Wireless Bluetooth Stereo Headset Kit (GBMHKIT) on the Buy.com website of $50 (free shipping; photo below). From the photo I could see that this would easily plug into the earphone jack on both my computer and my mp3 player (I have a Cowon D2). This was exactly what I wanted, and was even cheaper than the Freetalk headset. So I ordered this one to, and kept both unopened until Christmas -- when I was going to make my final decision, and return one or the other -- at least that was the plan. 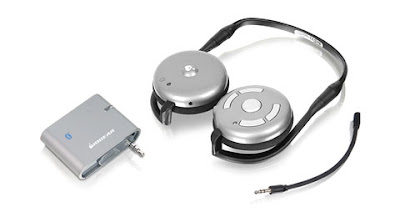 As you might have guessed, I ended up keeping both headsets because they are so different from one another. For example, both come with chargers for both the base and headset, though the iOGear charger plugs into a wall and is completely removed from both the base and headset in order to use them. On the other hand, the Freetalk headset charges through the USB port, to which the base station is always attached, and the headset can be used while charging or not. Nicely, you can add or remove the headset charger cable, which comes out of the base station, without any impact on the audio.

When the Freetalk is a working it is on and paired. Although there is a pairing button and an on/off button, I almost never touch these. I still have the issue of switching from speakers to headphones on the fly while audio is playing. I generally have to close whatever is playing then start it again after plugging of unplugging the USB. But at least it does work when I do that. The headphones are a bit tight, but are otherwise ver comfortable and microphone, which cannot be removed, works well with Skype.

The ioGear heast has a removable mic and are lighter and more comfortably looser. Because they feel different, I will sometimes switch between the two when one starts to feel uncomfortable. The ioGear sound quality is not quite as good as the Freetalk headset, which I tend to use more. The ioGear is less convenient in that I need to turn on and pair the base station and headset each time I use them; but they are certainly more convenient in instantly plugging into and out of my computer, and transferring the audio from and to my speakers, and they work with my mp3 player (and would be great for a TV, too, if I ever watched one).

The Freetalk definitely sounds better (richer sounds) and holds up over distance more than does the less expensive ioGear (which is better for talk than music). I can cover most of my house without a degredation or loss of sound from the Freetlak. I cannot go very far at all with the ioGear before it breaks up and then disappears, though I can carry my mp3 player attached to the ioGear base with me which is convenient. The ioGear has a real problem with walls - the more you have the less likely the signal will pass through them. A simple house layout would probably be the best.

thank you for writing this, I've been trying to understand the plusses and minuses of both brands and these "minimalist descriptions" are driving me insane! you're awesome.

Thanks for the comment. After owning these for a few months, I can reiterate that the Freetalk has a much better sound and distance. The Iogear seem to be getting worse with time. Sometimes I am sitting right next to the bluetooth transmitter and the headphones will cut in and out. :(

A Few Other Things I Do